In the highly competitive U.S. political system, threats of espionage are ubiquitous. When political parties rival for positions of power, spying can be used to gain an advantage. Probably the most infamous case of political espionage in America was the Watergate scandal of the 1970s. During Republican President Richard Nixon’s campaign for re-election, he was linked to the break-ins of the Watergate office building in Washington D.C., Headquarters of the Democratic National Committee. (Here’s the problem, Nixon knew nothing about the Watergate break-ins other then trying desperately to cover them up, his only crime was to hire “The Plumbers” to stop the leaks coming out of Washington.

Nixon had no idea that the Plumbers would turn into burglars that may have also involved themselves in Kennedy’s assassination. They needed to stop Nixon from probing and pressuring Richard Helms of the CIA about the “Whole Bay of Pigs Thing“. And that is as far as Nixon’s involvement in the Watergate break-ins would be, NIXON WAS SET UP.) Five men were arrested for breaking in and attempting to photograph documents and wiretap phone lines. Oval office recordings revealed Nixon’s only involvement was covering up the break-ins, which was the incident that ultimately led Nixon his resignation.

That’s as far as his investigation ever went, he was never arrested on any of these charges. Very few people know about my father’s “political espionage” that consisted of stealing documents and photographs from the CIA’s office that marked these individuals as being in Dallas TX. on the day of Kennedy’s assassination.

These photo’s were viewed by several folks Richard Poyle, Nino Diaz, Aldo Vera, Felix Rodriguez, Eugenio Martinez and many others including Rudy Junco who drove my father to the CIA office in Miami. Rudy was at first very reluctant to speak about the photos, and because he was a close friend of my father’s we had several conversations before he opened up to a very in dept conversation about these photo’s.

Rudy said, “I have not spoken to anyone about these photos since the death of your father“.

At one time I was under the impression that Fidel Castro had something to do with my father’s death through a man by the name of Ricardo Cabrera because of what I was told by someone else, and that Ricardo worked for Castro as a high level G-2 agent, and he had infiltrated my father’s group, The Cubanos Unidos.

I would have believed what this other man was telling me had it not been for Rudy who shared with me the entire story as to how my father came in-contact with the stolen photographs of the men in Dallas TX. the day of Kennedy’s assassination.I too have received the run around by many folks in Miami who have told me that Castro was involved with Kennedy’s assassination as well as my father’s. However, I tend to believe those who are not blaming Fidel Castro for these events and are delivering a truthful statement…

I now realize why my mother never wanted to tell my sister or me what really happened to our father, I lived my whole life thinking that my father’s death was nothing more than an accident, boy was I wrong.

(This information is more then likely still buried away with the rest of the classified documents within the CIA, and God only knows when it will ever be released.)

I have requested from FOIA that more information about my father be sent to me, after all its been more than 35 years since the death of my father, so what could they possibly have on my father that they don’t want the world to know? I appealed my request to the United States Justice Department, (and, I won). They remanded my appeal back to the FBI and asked that they release ALL of my father’s information. Below, is a letter I received regarding my appeal. You see, whatever my father knew, whatever my father had still warrants keeping his information a secret, their excuse is that the information my father had posts a threat to National Security.

The public has never heard of the stolen photographs my father had, the CIA never informed the FBI of this, (until now,) and at the height of the HSCA (House Select Committee on Assassinations) in 1977 my father was killed before this information could ever be made public. 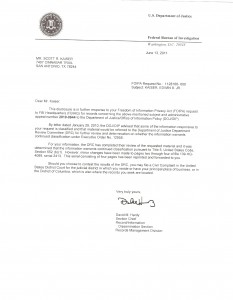 George W. Bush Sr; “What is at stake is more then one small country, it is a BIG IDEA A NEW WORLD ORDER“

How will things be purchased in the future? Will technology be so far advanced that man will no longer be needed?

George W. Bush Sr; “What is at stake is more then one small country, it is a BIG IDEA, A NEW WORLD ORDER.“

For those of you who will not be attending COPA or the JFK Lancer conferences held in Dallas 2014 for the 50th anniversary on the assassination of President John F. Kennedy, Dallas will come to you.

Below, is the link providing you with (real time events), and the entire view of downtown Dealey Plaza square, or should I say more of a rectangular shot.